You are here: Home / Our Garage / 79 Series LandCruiser Covid Reno 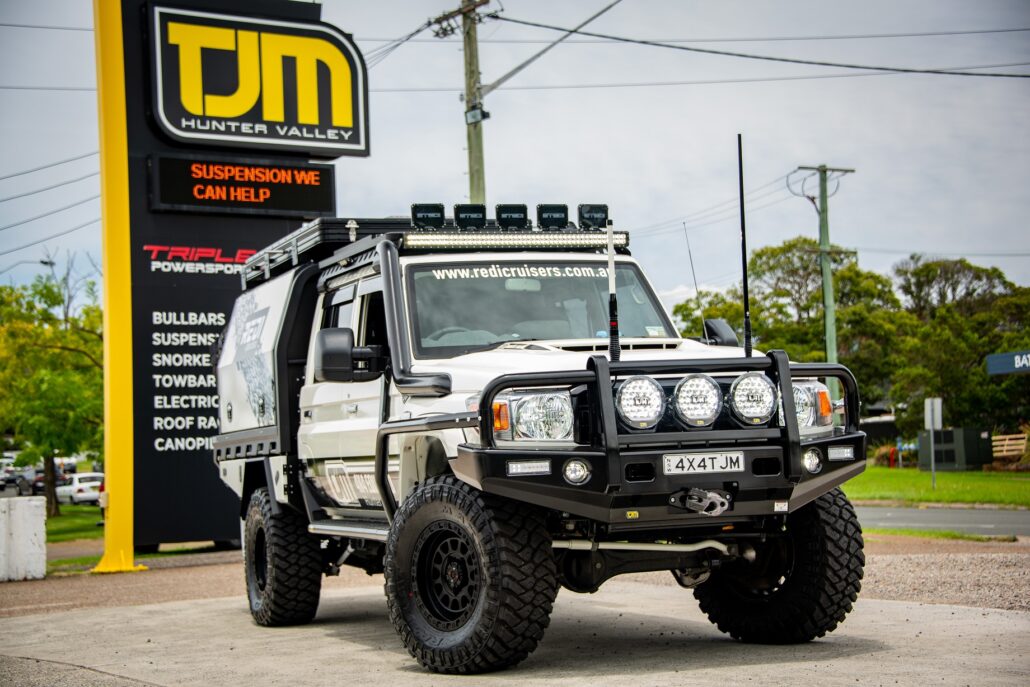 We’ve been known for turning over a vehicle or two in our time, but with current lead times on new 79 Series LandCruisers blowing out to a couple of years in some cases, and the current 79 Series in our stable still looking good on the odometer, we thought why not do a makeover on the big white beast? Many might ask why would we, when the big girl already has so much going on?

It comes as TJM and many of our preferred partner suppliers release new products to the market including TJM’s all new T13 Outback Bar for the 79 Series LandCruiser. This vehicle is, of course, our store display car so it needs to represent the current market.

We moved away from the colour coding, retaining the standard black powder coat finish to tie in with a slightly new theme for the vehicle on the bar. The new Outback bar by TJM has an improved approach angle, is built stronger and the new styling of the bar suits the 79’s boxy front end like no other bar on the market. The design team at TJM really put their heads together with this one and the results speak for themselves! 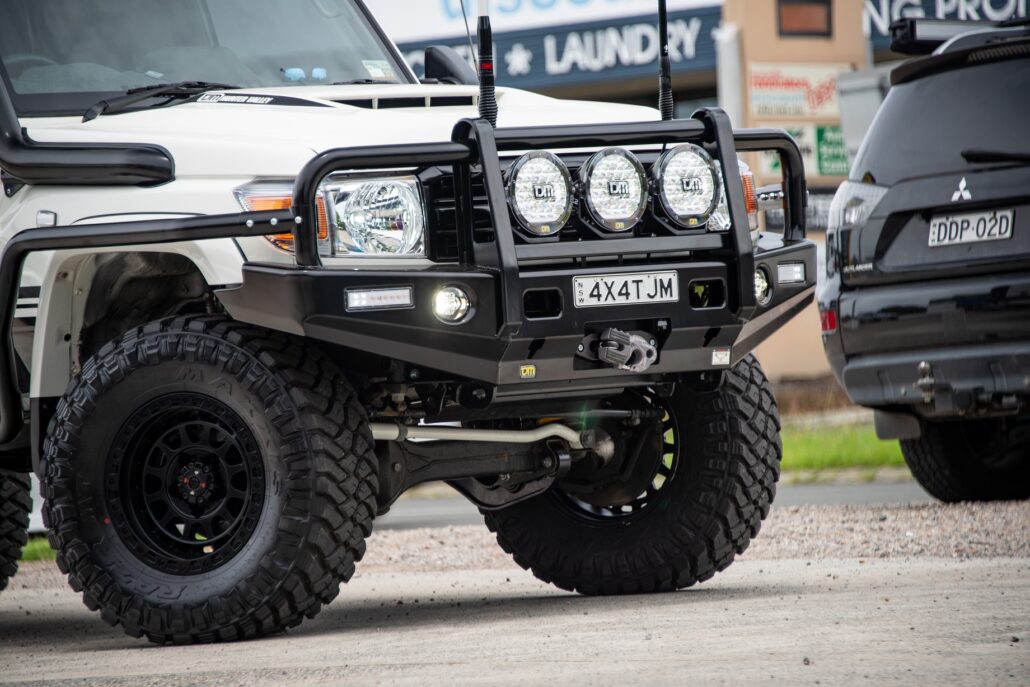 There’s room for three 8.5” driving lights, so we put the best light on the market – the TJM Ultima 215 MK2 driving lights. The bar also houses the new TJM Torq winch, and we stuck with the Factor 55 Pro Link winch hook for forward recovery duties. Side bars and steps are TJM 63mm with a Raptor Coat finish over the polished alloy tread plates.

The other major change you may notice is the EVO 2 tray and canopy package by Mits Alloy. Mits have re-designed their trays and canopies with several improvements over the older style. The Satin Black finish with colour matched doors ties in with the whole theme as well. This tray is designed around the Jmacx 300mm 4495kg chassis extension on the 79 Series, and the guys at Mits are on the ball with this popular mod for the 79 having a standard, off-the-shelf tray design to suit. 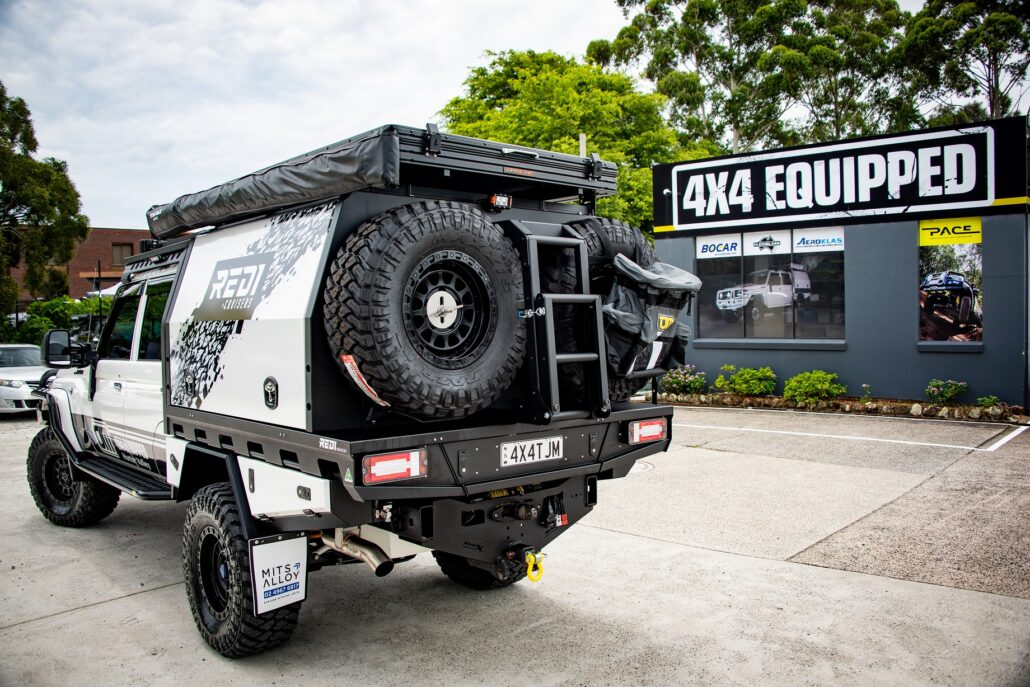 The internals of the canopy were also given a change up too – most noticeably the addition of the Redarc Red Vision battery management system incorporating two Ivicta Lithium batteries totalling 400a/hrs and a 3000w Redarc Pure Sine Wave inverter. Solar input is via two Enerdrive 180w solar panels and power is pretty well as constant and stable as a 12v battery system can be.

There’s the new TJM Pro Series twin air compressor mounted to the front wall with air on reserve thanks to the TJM Pro Series 5L air tank. This is one air combination of three on the vehicle, but we’ll get into that later!

There’s a Bushmans 130L Upright Fridge paired with a Dometic CFX75 Dual Zone fridge on a Clearview ES220 drop-down fridge slide to keep food and drinks cool in the hottest conditions. The Travel Buddy 12V pie oven is always a must and a charger for a Husqvarna electric chainsaw was also hard mounted into the canopy for ease and convenience. 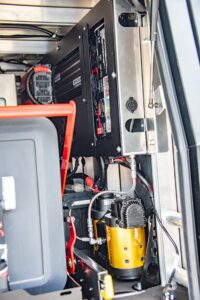 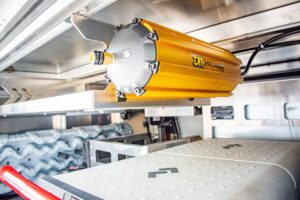 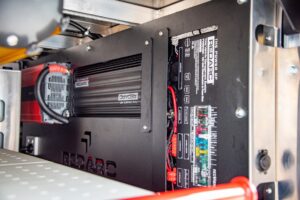 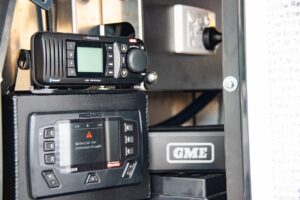 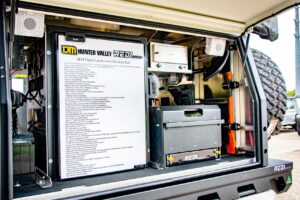 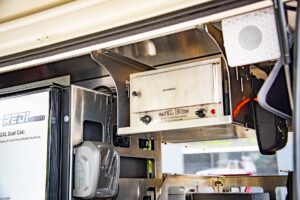 On top of the canopy sits Darche’s new Ridgeback hard shell roof top tent. This is Darche’s state-of-the-art answer to the hard-shell RTT market, and its low fold-up profile keeps centre of gravity and drag down to a minimum. The optional load racks allow us to run the solar panels above the tent as well, which is a bonus when the tent is up as it places the panels at a good angle to make the most of available sunlight.

The old-style Rhino Pioneer Tradie Platform on the cab of the 79 was swapped out with the new style Pioneer Plartform and Backbone mounting system. Strength, functionality and aerodynamics have been improved with the gear from Rhino and as usual there are plenty of attachments you can run on these versatile roof platforms.

We were loving the Stedi Quad driving light set-up our Redi Cruisers Troopy, so a set of 5 Quad Pros had to go up top when it came time for the 79 Series rebuild. And a 52” Stedi double row light bar couldn’t hurt up there as well – you know, just for when it’s really dark! 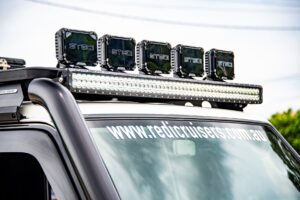 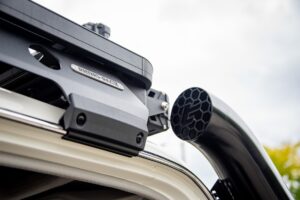 In the engine bay, there were a few changes made – the most notable featuring Torqit’s new stainless-steel high-flow air box and stainless-steel snorkel. We had the airbox powder coated blue to stand out and the snorkel was factory-finished in black powder coat. This is a mandrel bent, one piece design and comes with a bolt-in, steel DIY template for making the job easier.

Performance was also upgraded with an ECU tune by Just Autos. You wouldn’t even know this thing is pushing almost 4 tonnes on 35” tyres when you put your foot down! 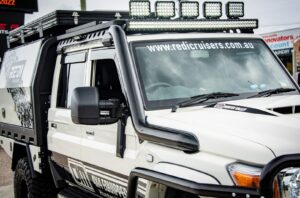 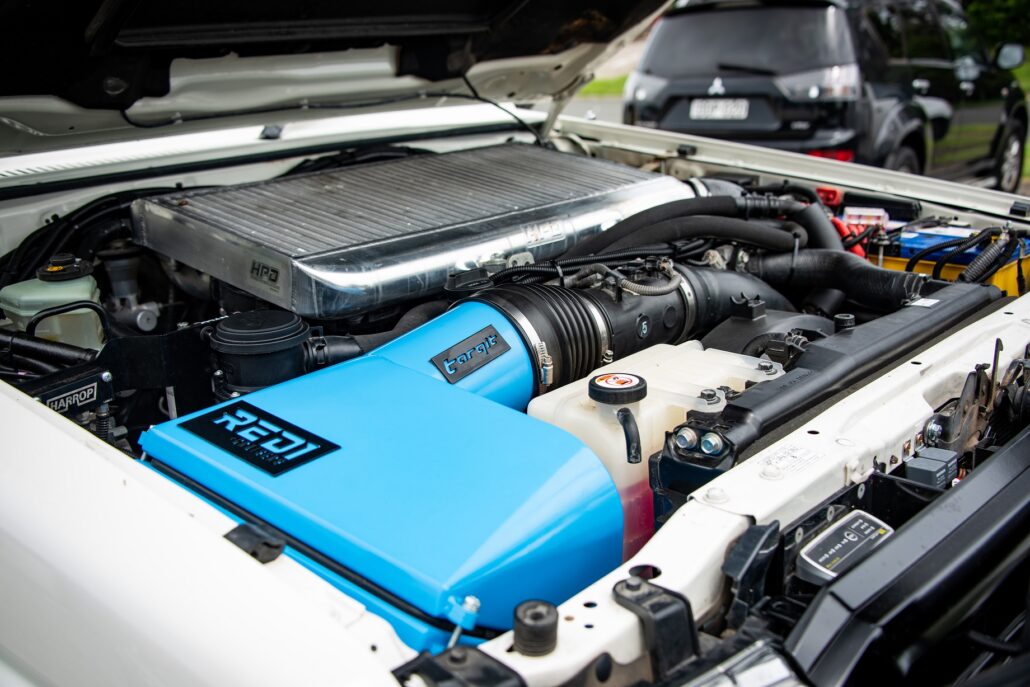 You wouldn’t even know this thing is pushing almost 4 tonnes on 35” tyres when you put your foot down!

The interior received some substantial upgrades too, including a Cruiser Consoles Bushmans Console and Bushmans Roadie Console Fridge. A set of One Stone Arm Rests in black finish to match the centre console and fridge increase the driving comfort and position, and a new GME XRS-390C UHF was added to the communications department as well. There’s a pair of 70 Series Brackets for mounting the GME magnetic handpiece mount and one for a future phone holder install for ease of reach and positioning out of harm’s way.

What do you do when you have six 35” tyres to inflate, caravan tyres to inflate and the need for running air tools as well as airbag inflation? You don’t just run one compressor – you run three! That’s right, you heard me – three air compressors, all with independent 5L air tanks for reserve.

XTR 4×4 Accessories have designed an under-seat compressor bracket to suit the TJM Pro Series single or twin compressor featuring a fire extinguisher bracket and airline fitting conveniently placed right at either the driver or passenger side front doors. So, we opted to jam as much air compression into this vehicle as we could possibly fit including a TJM Pro Series Twin Compressor under each front seat in addition to the compressor already fitted in the canopy. These are plumbed to a TJM Pro Series 5L tank each mounted behind the back wheel arches as well as running the additional air hose fittings off the seat brackets. 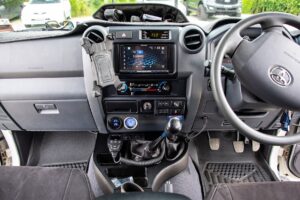 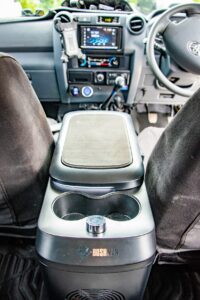 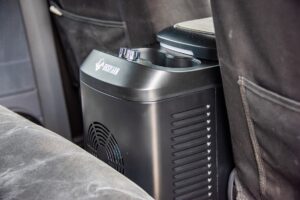 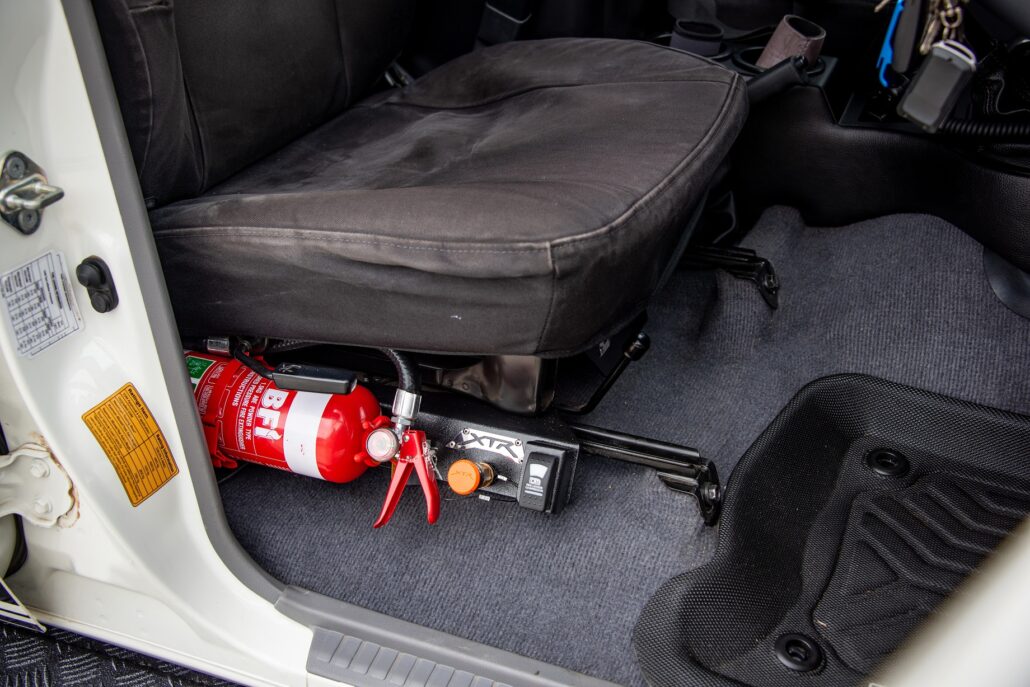 We’ve been known to change wheel and tyre combos up from time to time, so that was a given when this rebuild took place. The 79 Series is now running a set of ROH Assault alloys which measure in at 17 x 9 inches and have negative 12 offset. They are wrapped in a set of Maxxis Razr MT Tyres which are a 35 x 12.5R17 for the ultimate in traction.

The basis of the build essentially remains the same, sitting on the Jmacx 4495kg 300mm chassis extension, running Kings shocks with a little bit of a Redi Cruisers touch as a visual freshen-up. This gives us that massive GVM, upgraded towing to 4t and a total GCM of 8t. Carry much??? Some Redi Cruisers sign writing was also added to the original TJM sign writing completed by Tubby Signs.

The Covid Reno has been a screaming success and the big 79 Series is looking and performing better than it always has. As usual it’s a big thanks to all our suppliers that chipped in for the build and a huge effort by the workshop staff at TJM Hunter Valley to get the build put together. Is there a better built 79 Series LandCruiser out there? We think not! 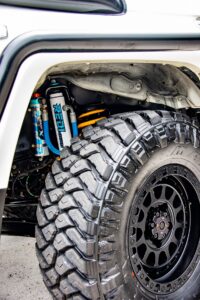 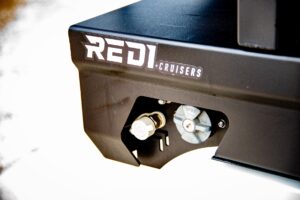 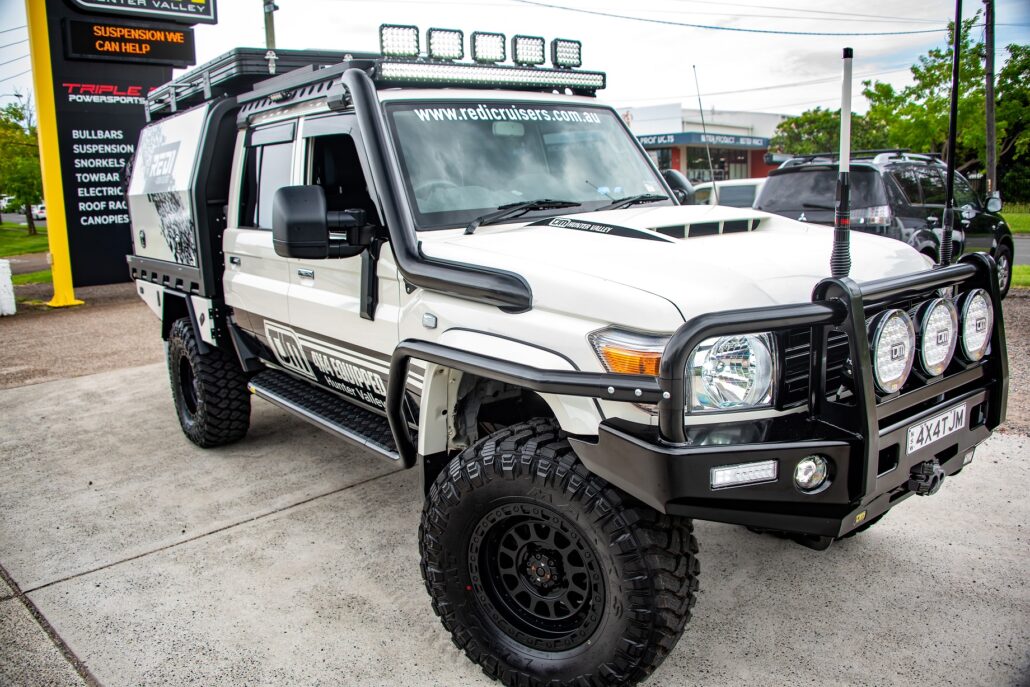 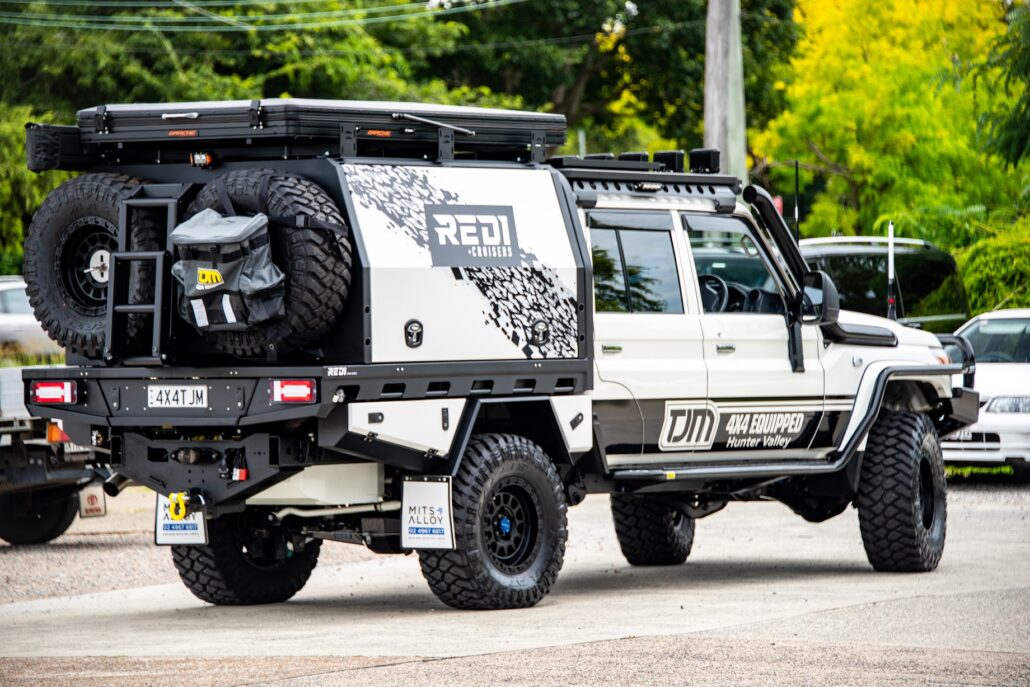 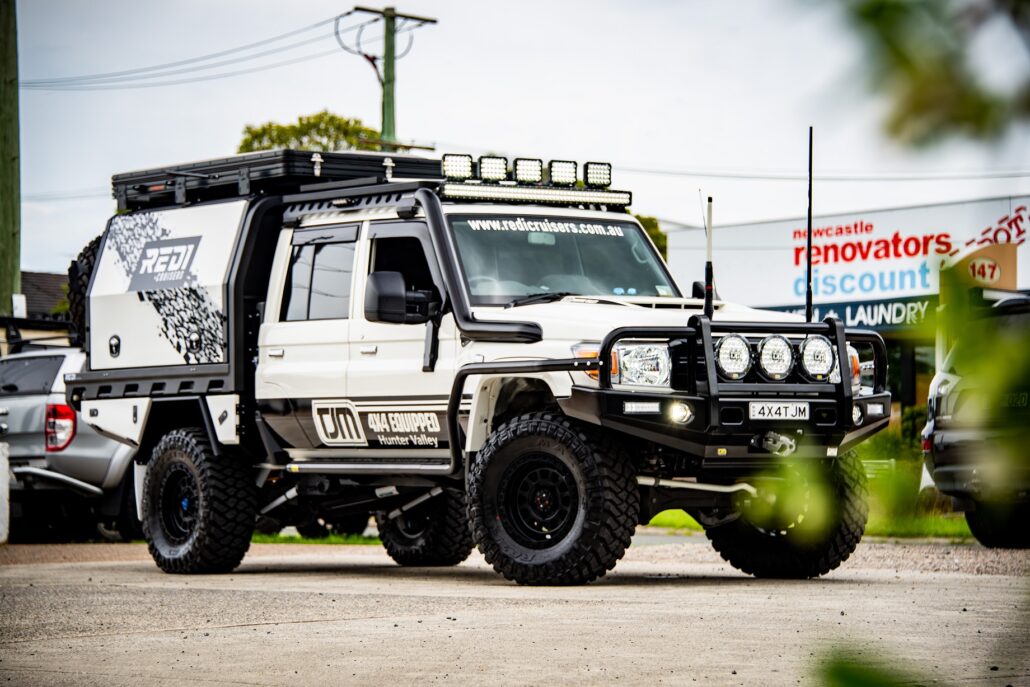 Want to get a build organised for your 79 or any 4WD for that matter? Get in contact with us at TJM Hunter Valley to organise a quote.

More inclined to DIY? Check out our online store www.redicruisers.com.au to get some of the products we use shipped to your door.