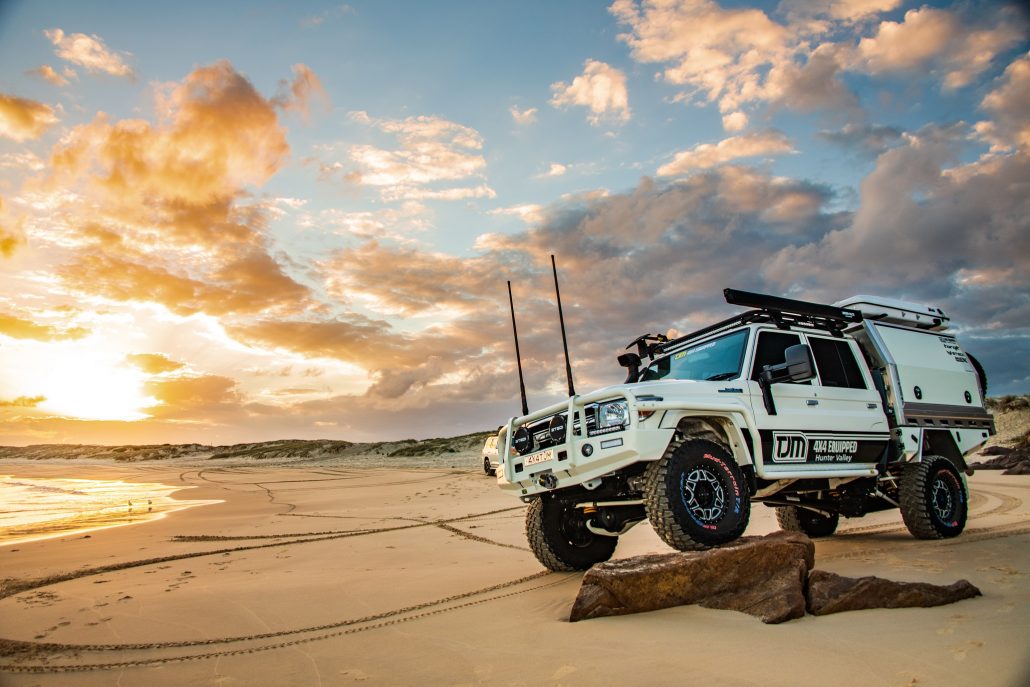 It all started with something simple – a bare bones, plain-Jane white 79 Series Dual Cab -brand new, but looking a little on the sad side to be honest! I know – let’s chop it up and make it longer! That was the call from business owner Michael and the plans were set in place for our new shop 79 Series.

But it wasn’t as simple as that. I know we’ve said it before, but this thing turned in to the biggest build we’ve ever done…literally. The foundation of this Goliath 79 is the chassis built by Jmacx Engineering which has lengthened the wheelbase by 300mm, displacing the bulk of the loaded weight further forward of the rear axle, and making the big girl more stable on and off the road. There’s more than meets the eye with this seriously heavy duty chassis though, as it also incorporates the coil cradle to complete the coil spring conversion without the need for an additional bolt-in cradle. The beauty of this set-up is the ability to legally raise the maximum GVM to 4490kg and the towing capacity to 4t. With a lower tare weight than most yank trucks available here – this leaves the payload on the stretched 79 greater than anything else on our market. 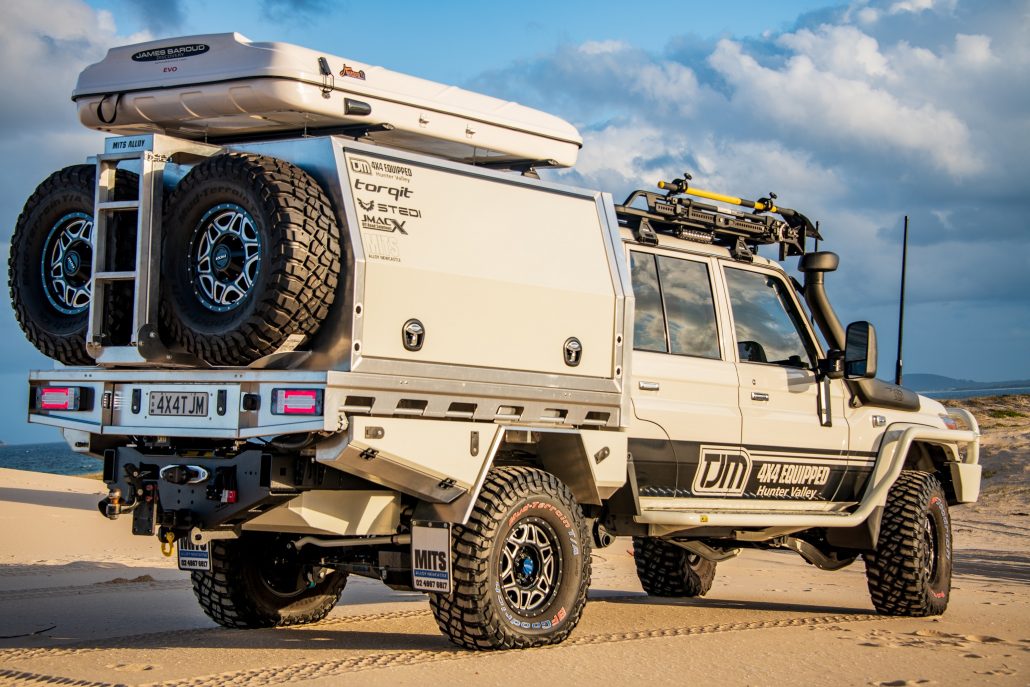 With that in mind, we set about loading this thing up to tackle anything this country’s harshest conditions can throw at it. Michael had plans to not only build a 79 with the works, but something that met his needs for touring, work and everyday driving. The next stand-out feature is the custom built alloy tray and jack-off canopy built by Mits Alloy.

Mits Alloy are a company based locally to us, that had already been building awesome trays and canopies for some of our customers, so we got them involved in the build early on in the piece to come up with some with a solution to suit the modified chassis. The end result is capable of utilising three fridges including the custom Waeco CFX100 beer keg fridge complete with built in beer taps. Other additions include the Dometic 110L upright fridge and the Waeco CFX75L Dual Zone fridge on the Clearview ES220 Plus drop-down fridge slide. After all – you can never have too much room for beer….and food! 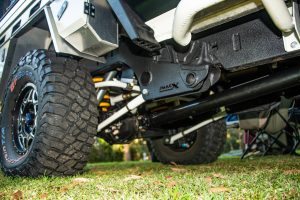 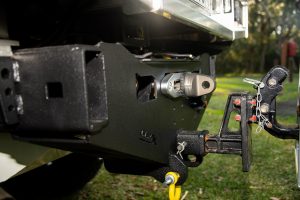 The fridges and all the lighting are powered by the Enerdrive 12v/240v management system running a 200Ah Enerdrive lithium battery all mounted in the canopy.  The system receives charge from the alternator via a TJM 25a DC/DC charger and Century Dualforce battery mounted under the bonnet, and there’s also solar input into the system for remote charging.

The DB Drive 36″ sound bar provides fat beats for the campsite and is controlled via Bluetooth through your phone and the canopy is finished off with Stedi work lights and LED strip lighting through-out. 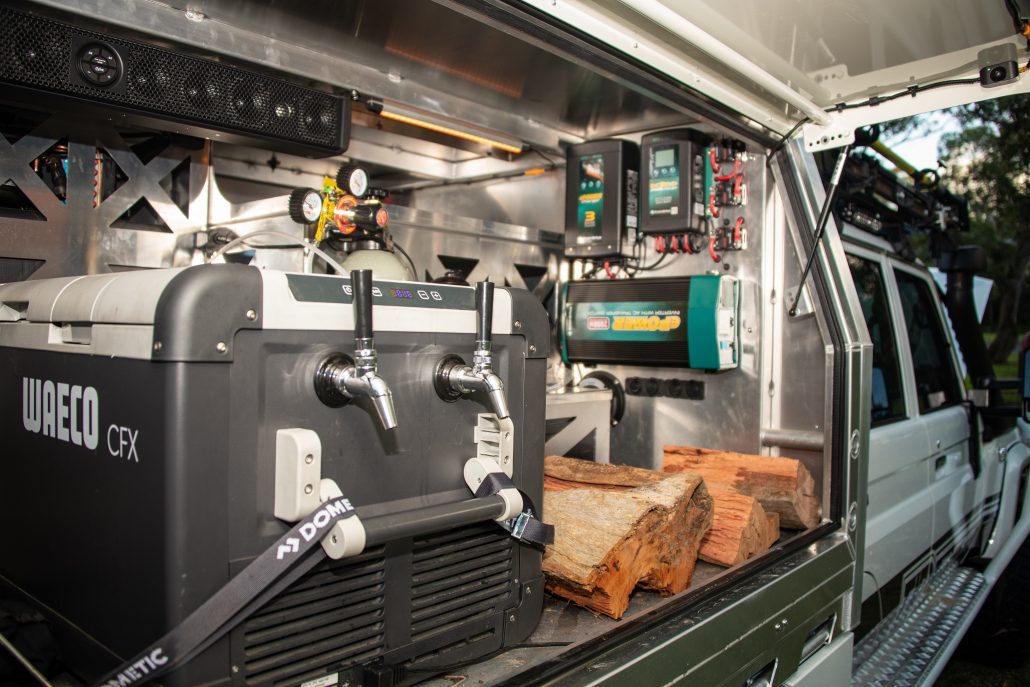 There’s room in the under body lockers for the on-board air inflation kit by Airbag Man and it’s controlled via the TJM Connect accessories management system. This takes care of inflation of the air bag suspension on the fly and has flush mounted air fitting for running a hose to the tyres for inflation. 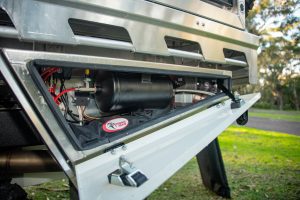 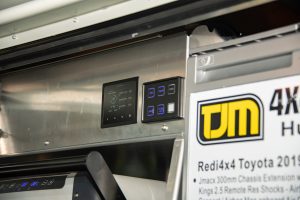 Piggy-backing the canopy is the Jmacx coil spring rear-end which uses a combination of Kings 2.5 remote res shocks and heavy duty coils with Airbag Man High Pressure airbags in the rear to assist in stabilising the load. The rear coils provide a much more refined ride, better axle articulation and the refabricated diff housing and upgraded axles provide added strength to make the rear-end bulletproof, even with the added weight. Can’t winch forward? The Jmacx chassis has its own rear mounted winch cradle which houses a TJM 12,000lbs Torq winch perfect for getting out of those tricky spots. 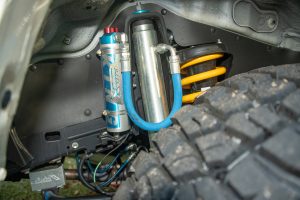 Power upgrades are curtesy of Streamline Automotive who preformed a remap on their dyno. This combined with a HPD upgraded intercooler, TJM Airtec snorkel and Patrol Doctor Air box have increased power by 42% and torque is up a massive 68% over the stock numbers. It’s more than enough to get the big girl up and sprinting off the mark. Exhaust gas is flowing hard and fast thanks to the Torqit 3.5 inch stainless steel system made specifically to suit the unique routing of the extended and coiled rear end of the Jmacx chassis. There’s a HPD catch can and Diesel Care Pre Filter system for better engine protection. 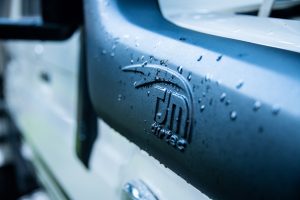 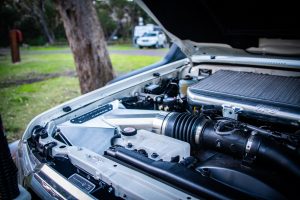 A heavy duty clutch is a necessary upgrade once you start adding weight, power and/or bigger wheels on the 79 and a requirement for the 4490kg GVM Upgrade. The clutch supplied with the kit is by NPC and they are our go-to supplier for clutch upgrades.

Barwork is all by TJM with the T13 Outback bar up front, brush rails and side steps, all running 63mm tubing. The bar houses a TJM 12,000lbs Torq Winch and a set of Stedi Type X Pros light up the night up- front. Giving a good spread of side lighting is two 11.5 inch Stedi light bars mounted under the headlights and two GME antennas take care of communications, with one for UHF and one as a phone booster. 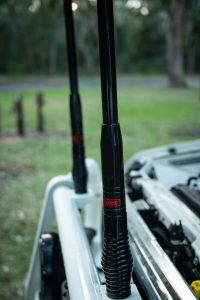 A Rhino Pioneer roof platform is fitted with more lightwork from Stedi including a 41.5 inch slimline lightbar up-front and two side facing 11.5 inch slimline light bars to light up the campsite. A Rhino Sunseeker Awning is bolted to protect patrons from the elements whilst attending the beer keg fridge, and the platform also has a Rhino hi-lift jack and shovel holder for extra recovery gear storage. 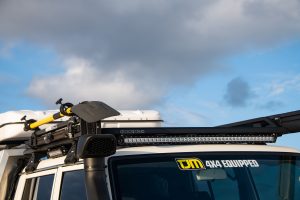 The interior has received the once-over with over-head and centre consoles from Department of the Interior that house the TJM Connect control panel and a Uniden 9080 UHF radio. Seat covers are care of Black Duck and there’s a Kenwood in-dash entertainment system front and centre, running upgraded speakers and a slimline subwoofer behind the back seat. The whole interior has been soundproofed using Dyno Mat to reduce panel vibration while the stereo is cranking and to reduce road noise. 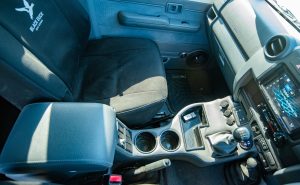 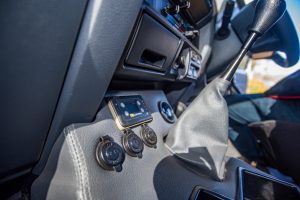 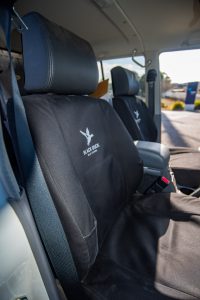 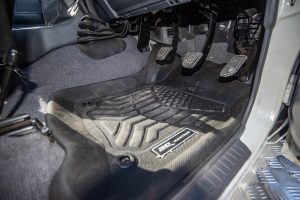 The whole package is rolling on ROH Maverick Alloy wheels measuring at 16x 8 inches and a set of 315/75 R16s by BF Goodrich which are a KM3 mud terrain tyre. If you’re in the market for an ultra-tough touring truck that has a payload unlike anything else on the market, then give us a call to find out what we can build for you. We’ve built this truck for a purpose and no matter what your purpose we can build one to suit your needs –  ready to tour, ready to work or just ready to hit all the hard tracks – Redi-built by Redi 4×4! 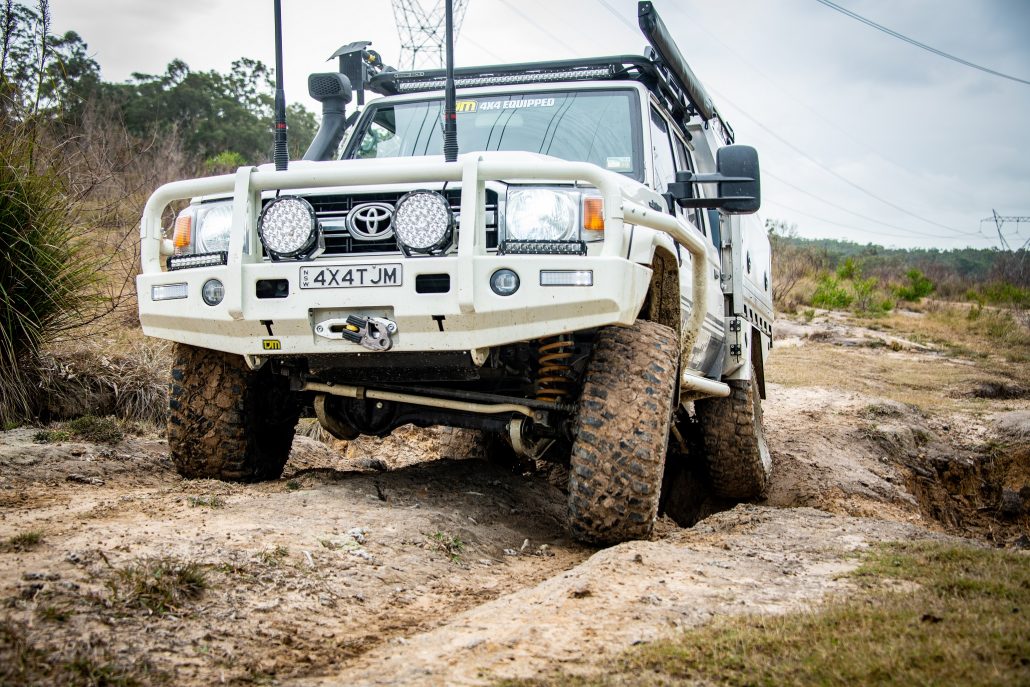