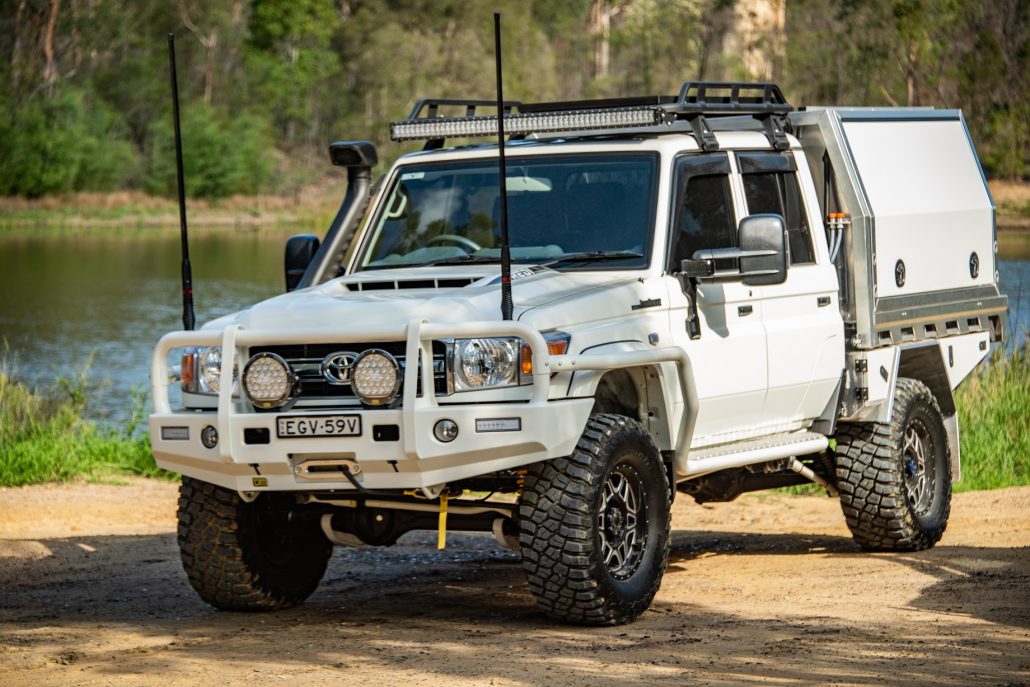 There’s an age-old saying that says bigger is better and when it comes to building a 79 Series, the saying couldn’t more true! When our customer Ian approached us after having taken some inspiration from our own 79, the call was made and it was pretty much a case of “I want what he’s having!” But in actual fact, there was a lot more that went into this decision and it basically came down to crunching some very important numbers based around those daunting little acrimonious – GVM and GCM.

The standard 79 Series Cruiser has a Gross Vehicle Mass (GVM) of 3300kg, so by the time a decent tray, canopy, bar work and all the fruit we use for touring these days goes on- that GVM can soon be blown out of the water. More importantly is the weight placement, with the design of the dual cab leaving most of the load siting behind the rear axle instead of over the rear axle. This can lead to poor handling characteristic when the vehicle is heavily loaded and it is amplified even more when towing. 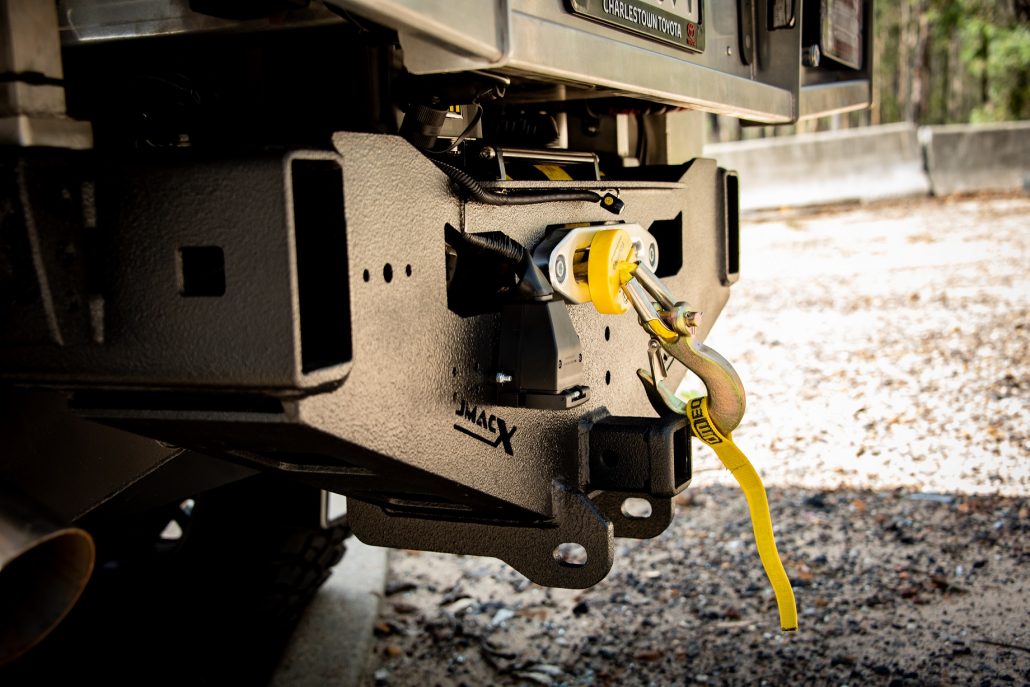 Fortunately the guys at Jmacx came up with a fix for this solution, so it was only fitting that our first official Redi-built Cruiser involved stretching this 79 using the Jmacx Chassis coil conversion. This kit involves a full rear chassis frame section that is 300mm longer than the standard Toyota chassis as well as being stronger and incorporating all the infrastructure that is required to convert the big 79’s rear end from leaf springs to coil springs. Kings remote res shocks, rear airbags and Jmacx custom colour coded radius arms finish the kit out nicely with coils giving a more refined ride, better axle articulation and those big meaty shocks handling anything you can throw at them. We also Raptor Coated the chassis rails for a hard, stone proof surface with a clean look. Yep – we’re talking taking the grinder to a brand new 79 and chopping the chassis clean in half! So are the results worth it? Let’s look at the figures: 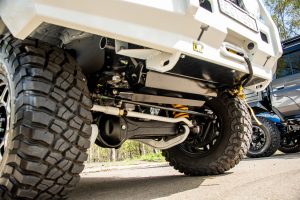 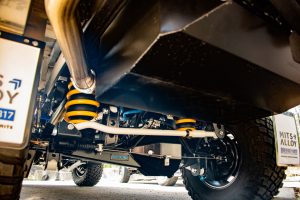 With the GVM now officially raised to 4490kg, towing capacity upgraded to 4000kg and a GCM of 8000kg, the numbers well and truly speak for themselves. The big girl tared in at at just over 3600kg with canopy, tray and all accessories, leaving almost 800kg of payload to still play with.  There are very few options on the Aussie market offering those sort of figures unless you look at an import, but when you factor in Toyota’s Australia wide parts and service network – the Yank tanks just won’t make the cut for outback touring solutions like the Cruiser does. What’s even better is that this complete package is rolling on a completely legal 4″ of lift and 35″ tyres!

While the chassis is the centre-piece of this build, it is just essentially a legal platform or foundation for the rest of the vehicle which entails a whole cavalry of aftermarket goodies from some of the best names in the business. Another stand-out feature is the tray and canopy package by Mits Alloy. They have designed the tray to suit the 300mm chassis extension and the canopy also features their unique uni-strut design, meaning that everything is removable or movable inside the canopy to suit your needs. There’s a 35L poly water tank built into the head board a stainless steel under body tank and trundle draw built in as well. The under-body lockers house a TJM HD air compressor and 3L air tank for controlling both the airbags and running an inflator hose for airing up the tyres.

The canopy is fitted with a 200a/h lithium battery set up with 40a DC and AC charging capability as well as solar input via an Enerdrive 180w solar panel mounted on the roof. It runs a 200w inverter and is all controlled via a Samarine control panel.This set-up runs the Dometic 110L upright fridge lighting throughout the canopy as well.

Bar work consists of the TJM T13 Outback bar, 63mm TJM Brush Bars and Side Steps, and the rear tow bar and rear mounted winch cradle are both integrated into the Jmacx chassis, housing a 12,000lbs TJM Torq Winch.  The bull bar also houses a TJM Torq 12,000lbs winch with synthetic rope and is running a set of TJM Narva LED215 Ultima driving lights for turning night into day. In addition to the driving lights we completed an LED headlight conversion using Stedi Copper Heads and a Stedi 52″ double row light bar was roof mounted. 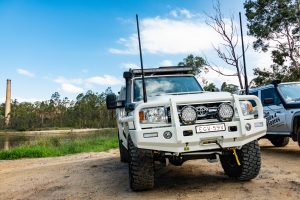 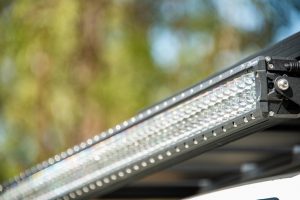 Performance and engine bay mods include an ECU remap, dyno-tuned by Streamline Automotive and an upgraded intake using the Patrol Doctor stainless steel air box and TJM Airtec Snorkel. The intercooler was also upgraded to hi-flow top-mount unit by HPD. The exhaust is custom made by Torqit to suit the unique routing requirements for the Jmacx coils and chassis extension and is a 3,5″ stainless steel DPF back unit. An iDrive was fitted for improved throttle response and engine protection is improved using the Diesel Care secondary fuel filter, and HPD billet alloy catch can. A high output water-cooled alternator by Rapid Power was fitted to add protection from mud and water and handle the extra dc power loads. An NPC heavy duty clutch was also fitted to handle the extra power, weight and tyre size. 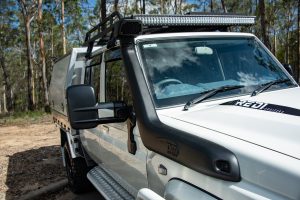 The interior was stripped out and fully dynomatted, then fitted out with Department of the Interior full length centre floor console and a Cruiser Consoles overhead console was fitted up top for additional storage. There’s a Kickass 170a/h AGM battery mounted behind the rear seats charged by a TJM 25a BCDC charger. This runs all the auxiliary lighting on the car itself and can also run the canopy accessories as a back-up to the lithium set up.  There’s an Airbag man in-cab wireless control system for the airbags with pressure display gauge mounted in the centre console. 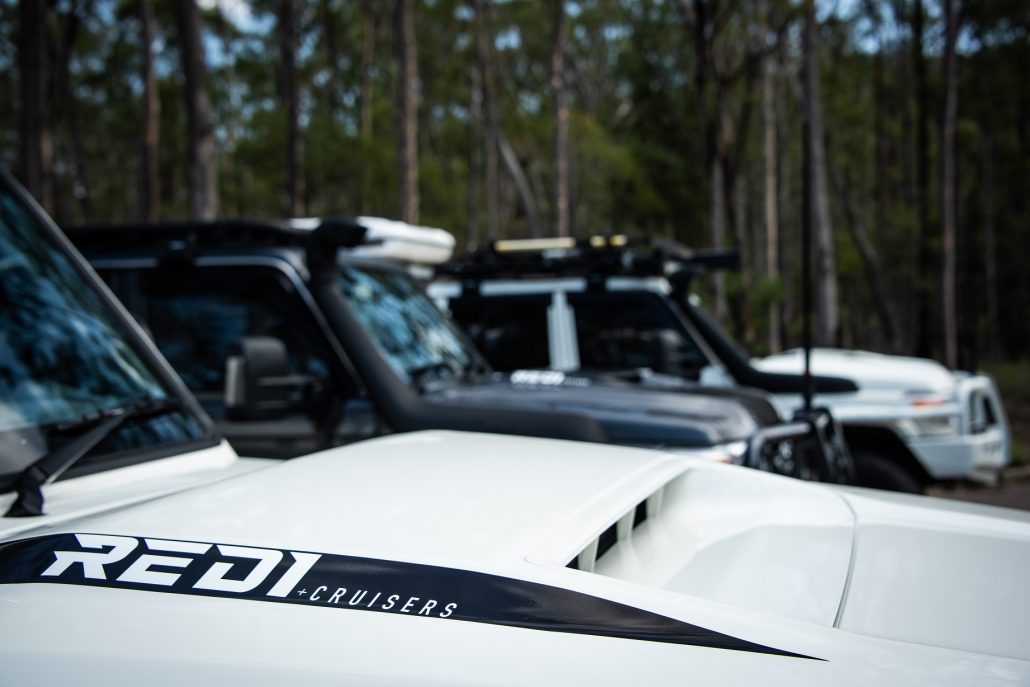 Communications are in the form of a GME XRS UHF radio running an AE4705B 6Dbi antenna and a CEL FI mobile phone booster with GME multi-band cellular antenna.  Black Duck 4 Elements seat covers protect the factory seats and the old steel-framed mirrors are replaced by a set of Clearview electric power-fold mirrors. Front and centre is a Kenwood touch-screen sound system with custom door pods by House of Soundz. The guys at House of Soundz also fitted a Mongoose alarm system while they had the vehicle.

Up-top is a Rhino Pioneer platform for additional storage and there’s some more lighting by Stedi for the campsite. The whole package is rolling on a set of 17 x 8.5″ ROH Maverick Alloy wheels that are load rated to suit the requirements of the higher GVM and a set of BF Goodrich KM3 tyres that measure in at 315/75 x 17″.

The 79 Series Landcruiser certainly is a hard vehicle to beat in terms of being rugged, reliable and able to haul big loads. So it makes perfect sense that when the need to exceed the standard weight carrying capabilities of the 79 arises that the solution is to simply make it bigger! Keep an eye out for Ian’s bigger than big 79 out on the tracks – you defiantly can’t miss the big white beast! 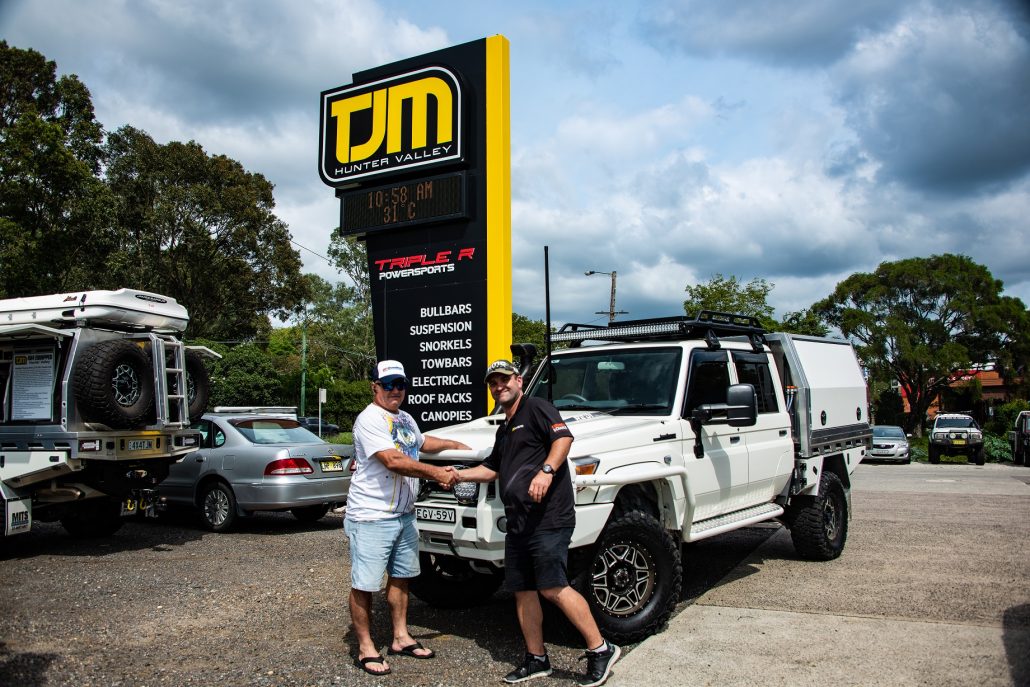 As a nation, our touring and towing needs have far outgrown the capability of any standard 4WD, so upgrading the current Landcruiser is the perfect solution to being able to go further for longer and carry more!

We offer a range of full build packages for the 70 and 200 Series LandCruisers that we have put together from years of experience, with each package being custom designed to suit your individual, unique needs and finishing touches. We can even source the new vehicle for you. Drive away Redi to tour!

Although the name Redi Cruisers is new to the game, the faces behind the brand are the names you know and trust. TJM Hunter Valley have been modifying Landcruisers now for over 5 years, sourcing parts from the best in the business including Jmacx, Mits Alloy, ASG 4×4, Torqit, TJM and Stedi.
Some of the services we offer include:
Coil Conversion LC70
Chassis Extension LC70
Dual Cab Conversion/ Chassis Extension LC200
GVM Upgrades
Tray & Canopy Packages
Interior Consoles
Barwork, driving lights, roof racks & winches
Drive-in, Drive-out packages
Wheel & Tyre Packages
Towing Accessories
PLUS we have something else exciting in the pipeline with our website coming soon. If you own an Landcruiser you are not going to want to miss this.

Redi to Rumble
Scroll to top